We could not have hoped for a better start to launching a new project and vintages than by enjoying wine with loved ones. 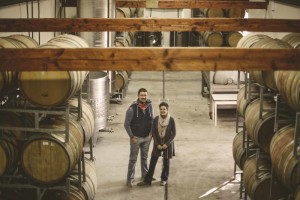 Two weeks have passed already since the launch of our new project Paardebosch Wines and the new David vintages’ releases.

At the tasting & light lunch we had at Paardebosch we also revealed the 220 year old cellar that we restored.

The feedback we received was overwhelming and the support something we consider ourselves very fortunate of.

So many people have contributed to the point that we have arrived at in our personal and professional lives that we just simply had to put everyone around a table (or two), thank them and enjoy a good meal and even better wines together.

We moved into the Paardebosh winery in December 2014.

The 220 year old restorated cellar & winery will serve as our base of operations and after the quick and early harvest of 2015 it has already proved well worth the time and effort to move here and get the place into top form again.

Situated at the foot of the Paardeberg mountain, on the Jakkalsfontein turn-off (16 km outside of Malmesbury) on the R45 between Malmesbury and Wellington the winery and farm is proving to be a true gem just waiting to be unveiled again.

Apart from the new David Vintages that was launched on the day we also introduced our Paardebosch project.

This is a farm-focused project based on old vineyards, steep mountain granite soils and mainly bush vines situated on the Paardebosch farm itself.

The Chenin blanc and Pinotage was introduced at the Swartland Revolution in February 2014 and since then we have managed to export to the UK, Maldives, Belgium and Holland.

All the grapes for these two wines are from the farm itself.

Read more about the wines here.

With the David wine range our focus is on the whole Swartland and parcels of grapes from various plots are used.

We currently produce 2 white wines and 2 red wines under the David label which will very soon be David & Nadia Sadie.

The 2 white wines are Aristargos (blend of Sémillon, Chenin blanc, Viognier, Clairette blanche and Roussanne) and Chenin blanc while the 2 red wines are Elpidios (blend of Syrah, Carignan, Cinsaut, Grenache and a small percentage of Pinotage) and Grenache.

Read more about the wines here. 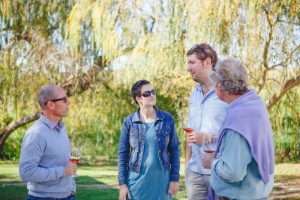 Among those who joined us on the day were writers that are honest in opinion, know what they talk and write about and also enjoy their wines. You wouldn’t be a good writer if you didn’t..

You can read more on what they had to say in the following articles:

Out of the Press – Angela Lloyd:

To read more about the wines that we currently produce you can do so here.

David Nadia WinesPaardebosch
About the author